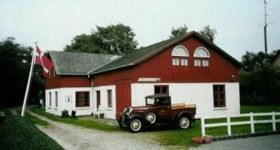 The Craftsman-Museum of Bindslev was established in 1990 on private basis of Edel and Jens Jakobsen. The building for the museum is Jens Jakobsens fathers, A. C. Jakobsens old joiner-workshop at the address, Mosbjergvej 3B. The assembling started with the old tools, which still were in the building, but very fast the museum received tools and other subjects from several of the old workman-firms, that throughout the years had been more mechanized. Others had been completely closed down or transformed to manufacturing, while others again were dieing out trades, which had no longer basis in a town as Bindslev.
In addition to that there are many single requisites, which had come from many different givers, local as national. In the year 2000 the museum, including the building, changed from the private ownership to independent institution with a fund ( look Organisation), where Edel and Jens Jakobsen has put up a not insignificant capital.
An old craftsman-town.
Bindslev is an old trading- and craftsman-town. In about 1900 there were in the town 6 blacksmiths, 14 carpenters and joiners, 13 bricklayers, 6 shoemakers, 6 tailors, 4 coachbuilders and 3 painters. After that time the machines began there capture in all trades – even hand-tools were mechanized. The museum shows workshops from the time, where trade and craft were work out of hand. The building for the museum is an old carpenter- and joiner-workfirm from that time, probably build in 1915 of joiner Karl Pol, who sold it in the year 1919 to Emanuel Olsen, who again resoled it 4 years later to A. C. Jakobsen.